Welcome to the April update of the Lewisham BAME Mental Health Carers forum. This is one of the four forums that I chair in South London. Out of the four forums, this group focuses on BAME carer developments in Health and social care. The group has been going since 3 years or so.  Due to the COVID-19 outbreak, I am running all forums via my own ZOOM account.

The invited speakers for April was Shilpa Ross who is a senior researcher at the Kings Fund policy team that works on a range of health and social care research programmes. Shilpa was invited to the forum to speak about her latest research that not enough progress has been made to address discrimination against black, Asian and minority ethnic (BAME) staff in the NHS.

Now although I mentioned before that the BAME carers forum focuses on BAME carer queries, I am very aware BAME awareness can suffer not only in the community, but also in the NHS and in education. So in this particular April forum i was hoping members can be aware that representation in all sectors in NHS is vitally important to reflect community values.

Shilpa Ross was first on the agenda where she firstly spoke about The Kings Fund, which is a charitable organisation working to improve health and care in England. The Kings fund was originally set up to raise money for London’s voluntary hospitals, but has evolved to do so much more.

Shilpa then spoke about her past background projects which include emerging lessons from clinical commissioning groups and the future of HIV services in England. She also co-authored a number of publications for The King’s Fund, including Bringing together physical and mental health.

Discrimination regarding BAME groups is a serious issue and still unfortunately happens in the NHS, we have to look at what can be done to address the situation. One way is to report on current problem in the NHS. Data taken from the Workforce Race Equality Standard (which measures NHS Trusts against 9 standards) shows how the NHS is working to improve the situation, but unfortunately BAME staff still need equal access to career opportunities and receive fair treatment in the workplace.

Shilpa spoke more about WRES and also noted that it is worth listening to the Kings Fund podcast on Race equality in the NHS workforce.

The forum was shown some types of problems BAME staff experience in the NHS workforce being Bias in recruitment, lack of BAME representation at senior levels in the NHS, reported levels of discrimination are high for BAME staff, white staff more likely to agree on employer treating them fairly regarding career progression, BAME staff more likely referred to disciplinary process and other issues the BAME carer forum should be aware of. More info can be found on the NHS England and NHS improvement website

Shilpa updated us on her progress especially talking to experts in the NHS and academics who are tired of seeing little to no change at NHS Trusts. Members of the forum were interested to hear what research was being done to hear the experiences of BAME carers, but no research is being done as present although hopefully this could change in future and there may be some research being done elsewhere. I was shocked to hear that Shilpa had been challenged in the past on why she is researching only about race, but on reflecting back on BAME experiences it is sad to say I am not too surprised.

I did ask Shilpa if there were any NHS Trusts who did well or poorly regarding BAME representation and development and she did mention East London NHS Foundation Trust, but I have managed to find a NHS Trust update on at least the top 10 NHS trust for BAME representation at board level.  I hope more work can be done during this year and onwards to increase identity and representation. 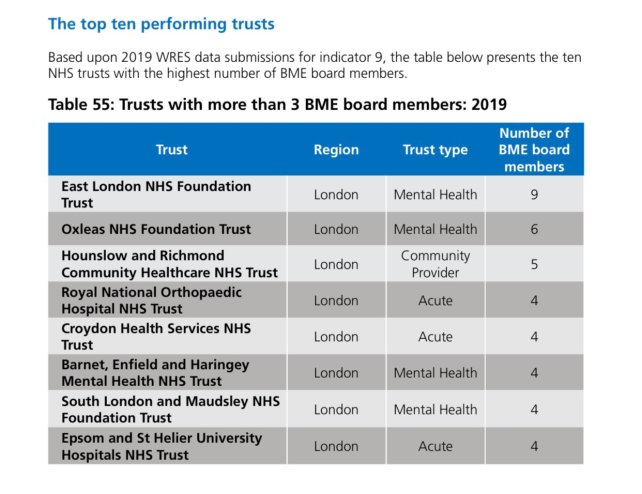 Most if not all members supported the work Shilpa is currently doing and I am especially interested in her report due out hopefully this summer.

Next up to engage with carers at the Lewisham BAME MH Carers forum was Sarah Atayero Managing Director at BIPP and Deji O. Sarah recently worked at Great Osmond Street Hospital on clinical research trials and now is heavily campaigning to have BAME clinical professionals access fields of psychology and psychiatry. BIPP have been running a series of events at Kings College London regarding BAME psychology and psychiatry development and engagement projects.

Please check out their Linkedin page below to hear more about their events.

BIPP Link on events and updates

I was delighted to hear that BiPP wanted to hear from carers about how BiPP should go forwards in their events and engagement with BAME groups. I certainly will take them up on their offer especially anything done in collaboration. BiPP presented us more information on what they do and what events they have been holding at Kings College. One of the events being “Addressing Men’s Mental Health”, which attracted an audience of over 200 individuals from various institutions, including the Civil Service, NHS, British Psychological Society and Royal College of Psychiatrists.

BiPP also do a Mini Masters Programme on ‘Race, Racism and Mental Health: Diverse Models and Approaches to Psychiatry & Psychology’. Deji O who is also a managing director at BiPP spoke about the work he does in Forensics regarding youth and gang culture. Sarah mentioned BiPP is still new and although it has had many successes, it is still a year old and has not had time to engage in many BAME groups as of yet, but at least they can add the BAME carers forum as a link.

Still, BiPP hold panels which are hosted by psychiatrists, psychologists, students and service users at KCL. Still even though BiPP network aims are at those who host their events, they also include white audience due to trying to influence change rather than blame culture. BiPP was founded by Keisha York who studied in MSc in Organisational Psychiatry and Psychology at Kings College London. You can read more about BiPP from Keisha’s perspective in the Psychologist, which is a magazine from the British Psychology Society who BiPP also network with.

As noted by Shilpa earlier BiPP are aware that there is a under representation issue in the psychology and psychiatry field not only in the NHS, but also in education. This was proven via data shown to the carers forum, which is distressing to hear that there is an over representation of BAME service users in the MH services. BiPP want to provide insight into how BAME groups can access careers be it in the NHS or education in psychiatry and psychology. They hope to raise awareness and identity of BAME psychology out in the field, plus they want to explore the situation of racial issues in the NHS and education. Deji spoke more their past events and the outcome of running online feedback about the events.

There was many interesting and relevant questions from carer members of the forum especially on how BiPP can reach harder to access BAME groups. We hope to hear more from BiPP later on during the year.

This concludes the April update of the Lewisham BAME MH Carer forum.