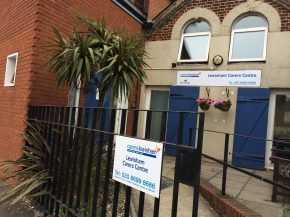 Welcome to the June update of the Lewisham mental health carers forum. A forum aimed at unpaid carers supporting someone close who has a mental illness. This is one of the 4 carer groups that I run per month. In attendance were our usual carer members along with representatives from Lewisham Healthwatch. The speakers from South London & Maudsley NHS trust being psychiatric Liaison staff and the lead from SLaM Patient Advice Liaison service. We were also joined by SLaMs involvement lead for Lewisham and Croydon, plus we were also joined by the Mental Health Lead of Lewisham and Greenwich Hospital trust.

Speaking first was the psychiatric liaison nurse who spoke about the importance of their service. Ama the Liaison Nurse mentioned that SLaM’s psychiatric liaison is a 24 hour crisis service that works in partnership with the Emergency Department. Specially trained mental health professionals are there at Lewisham Accident & Emergency to assess acute MH referrals.

Once the assessment is done, the patient is signposted to the appropriate service to provide further support to manage the patient’s crisis.

The Psychiatric Liaison Team consists of the following

Ama spoke about why the role is important. Which the main points are

Ama then spoke about her role as Carer’s Lead in the service as their are many carer leads on the other inpatient wards. The role of a Carer Lead in the NHS Trust is to ensure that those caring for people with mental health problems raise their concerns and are supported. They also lead on ways to improve how staff work with carers.

Carers Leads encourage carers to get involved and have their say about NHS Mental health services that SLaM offers to both carers and service users. This is so that they might be able to make improvements and provide a better service for all.

Ama then presented the forum with a template of the NHS Trusts Electronic Patient Journal with is SLaM’s patient database system. One of the main aims of the system is to help identify patient their family or who their main carer is. The NHS Staff check on EPJs to ensure that patient or carers can have a conversation with the staff about what is recorded on the system.

Ama explained some of the patient system database processes to the carer members. One of the things some members of the forum were interested was the NHS Trusts “Carer Engagement and Support Plan”. A member of the forum has never heard or had a CESP and were wondering what is its function.

Ama moved on to explain what a Caldicott Guardian’s role at the NHS trust does. She also explained some notes about the information governance team. She explained the following.

Ama then talked about the Patient survey and how it goes on to improve services. 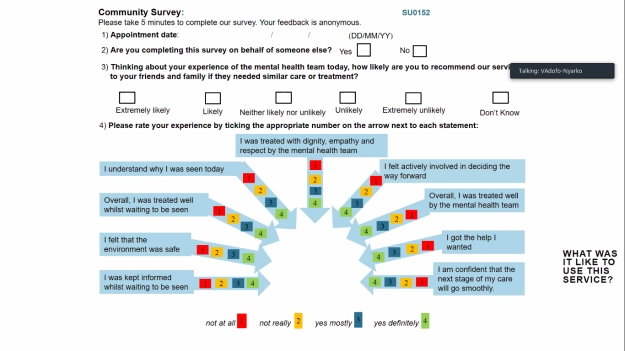 Ama admitted that a lot of the times in the A&E setting a lot of patients that turn up do not actually have family, close relatives or carers, which is unfortunately a sad fact. It is stated that some families or carers might give up on someone who has serve mental health illness or that the patient does not want anything to do with their family, friends or relatives. A lot of the time it could be that the illness pushes people away and it is well known that those suffering psychosis are suspicous of those trying to help them.

The presentation moved on to the changes to the team due to the COVID-19 situation as the team has moved to the Ladywell Unit Outpatients department. When a patients does present at A&E a band 7 nurse will decide if the patient can be transferred safely to the outpatient department or any of the Primary or Secondary services.

After the presentation we had a number of questions from the carer members of the forum. The questions raised were of the following

Although some of the questions were responded to at the online forum, a lot of the questions will be taken back to the trust where members are hoping for an update in the future forum. The forum moved to discuss how families and carers should be encouraged to be aware that they are carers and identify themselves to patient systems. This is so families and carers can be tracked and be involved in the care and support of their loved one. The forum requests someone responsible for GP services in Lewisham present to the forum regarding carer identification at GP practices.

Next we had Kevin Ramjeet speak about his position as Mental Health Lead for Lewisham University Hospital and Queen’s Elizabeth Hospital in Greenwich, Kevin works closely with SLaM in Lewisham and Oxleas in Greenwich. I mentioned in the forum that Greenwich Healthwatch are looking into what is provided for MH carers in borough. Kevin is particular interested in patient feedback regarding hospital emergency departments regarding waiting for bed, waiting times and patient experience of services.

Next we had Jim Ells from SLaM PALs speak about the service. Jim responded to the following queries from the forum.

Basically Patient Advice and Liason service, which is a way to allow people to be placed in touch with the correct department.

What is the PALs query process?

There was a bit of confusion with this one, since Jim felt this question was on how staff at the NHS trust would run a query to look for information, although I had meant it to be some process on if a service user/carer raised a question on where it would go.

What type of compliments, queries or complaints from carers?

These are varied and queries can raise enormously. It depends what type of information a person was looking for. It would be easier if queries are dealt first within PALs before it escalates to a complaint unless the query was a complaint in the first place.

How can PALs work with this forum or the Lewisham BAME one?

Its about time and relationship, as long as Jim can attend the forum, but it depends on what the forum requires of the PALs service. The forum is interested in stats to get an overall view of the service to see what is working and what is not.

The forum was interested in the complaints process, but Jim mentioned that complaints is under a different department. A request has been put in for the complaints staff to attend the carers forum. Some were concerned what would happen if a complaint was made about a staff, what would be the reprecussions especially if carers are not aware how to make a complaint or refuse to.

A carer raised an interesting question regarding the use of staff email accounts being closed causing complaints and queuries to be lost. It was noted there is a database system for queries to be placed into rather than relying on emails, but there is a system where staff can access email accounts if information is required in extreme circumstances.

The last part of the carer forum was updates from the Lewisham and Croydon involvement lead. As you might already know SLaM prides itself on involvement and co-production, which is something I am interested in when I engage with other Mental Health NHS Trusts, it is also something I am looking out for in Acute NHS Trusts being Guys & St Thomas, Kings NHS Trust, Lewisham & Greenwich NHS Trust.

The update from the involvement lead was on discussion of the IAPTs service lead regarding waiting times and when they can present to the forum regarding IAPTs and how things are progressing with the service.

There was also an update on counselling for carers via Carers Lewisham, which cannot be offered for newly registered carers but this is something they are looking into.

There is also a new trust online service from SLaM called “BETH”. which used to be called “My Health Locker”. Basically “BETH” is a new way for service users, carers and staff to communicate and collaborate.

For service users, Beth supports personal choice and autonomy. Where SUs can link their Beth account with their NHS number to access their health records in order to:

There will be an remote online demonstration of BETH via recovery college booking process next week.  Other updates were on the Lewisham Advisory group regarding developing links to the BAME community, investigating how services were responding to Mental and physical health and looking more deeply into online services via the COVID-19 situation.

– Their role at the trust.
– The importance of patient data
– A Brief overview of how PEDIC data is gathered
– PEDIC stats on patients in Lewisham so far plus if possible, ethnicity
– Plus Any data regarding carers in Lewisham.

The forum is interested in data queries showing identification of carers and what has been offered to the carers e.g. Carer Support and Engagement Plans or Carer Assessments.