Here is the update for the Lewisham Mental Health Carers forum for July 2017.  This is one of the older mental health carer forums in south London, the carers forum has been running for more than a year.  Of course, When I say “Mental Health Carer”, I mean someone who is caring unpaid for a relative, friend or neighbour suffering from some form of mental illness.

To watch the video update of the Lewisham MH carer forum, please click the video below.

At July’s Mental Health carer forum, we had the guest speaker Kathryn Hill who is the Nursing Directorate: Patient Advice and Liaison and also Trust carer engagement lead.

Kathryn spoke about the following. 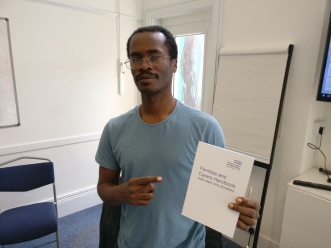 One of the members of the forum mentioned the carers handbook should also be placed for each GP in the Borough as a reference tool.

Kathryn also spoke about the carer leads network being developed at the trust, so there could be a carers lead forum, where mental health professionals assigned the carer engagement role can raise and discuss issues.

Kathryn also mentioned carer training for staff, one being simulation training.
Also at the Lewisham Mental Health Carer forum, I presented on carer networking and why it is so important.  Basically I see the forum not as a carers support group, but it should feed from the carers support group and raise issues or compliments channeled towards the mental health trust, commissioners and the council.

We looked at the following types of carer networking in where to meet fellow carers.

I hope the update for July’s Lewisham Mental Health Carers forum has been informative, see you at the next month’s update.