Welcome to the September update of the Lewisham Mental Health Carers forum. I guess you might already know, that I facilitate two carer strategy forums in the borough of Lewisham.

However one of the forums focuses more on BAME queries/issues with families and unpaid carers. The one that runs at Lewisham Carers tends to focus on unpaid MH carers as a whole. 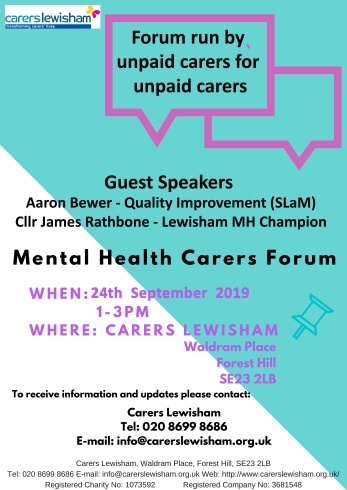 Just as a reminder, the term ‘mental health carers’ refers to unpaid carers supporting those with mental health needs. I know not many people are happy with labels, but on some level it just helps with identification and at best helps to lessen isolation as people know they have something in common with each other.

For the September Lewisham Mental Health Carers forum, we were lucky to have Lewisham’s latest mental health Champion James Rathbone, who is also the Labour Councillor for Lee Green. As unpaid MH carers, we were also joined by South London & Maudsley’s Quality Improvement QI Facilitator. It is important NHS mental health trusts engage with families and carers at grassroots level.

We first heard from Cllr James Rathbone who has lived experience of mental health. He spoke about how he became a mental health champion and why he would like to make a difference in the community regarding mental health needs. Not every service user can speak out when addressing mental health issues and it helps when someone is high profile enough to raise mental health at important meetings.

James was critical with the term ‘parity of esteem’, because he felt the term itself does nothing to address the real issues. He felt the main issue was funding and the new term should be ‘parity of funding’. He felt what are services bringing to the table? It is easy to talk, but funding matters in the end, plus how the funding is used.

James talked about the big launch of the Lewisham suicide prevention strategy held on the 11th of September 2019. I am not fully aware of the suicide stats in Lewisham or other London boroughs, so it would be interesting to chase that up. Especially since I am a carer member of SLaM’s suicide prevention group.

The next and last point raise by Lewisham’s Mental Health Champion was on how Families and carers can be involved in shaping Lewisham’s mental health services. I asked this query, because families and carers should feel part of the system, they should have their views and experiences taken into account and feel empowered they have the chance to be involved.

James spoke of how carers can become members of their NHS trust and have a greater say on what is going on. James spoke that we should pay attention to what SLaM governors are doing and try query what they are involved in. James mentioned that Lewisham CCG have their public reference group, which allows for involvement and it helps to understand the important health policies affecting the community.

We were glad James mentioned the important Lewisham stakeholder event on the 14th of October, since members of the MH Carers forum will be holding a workshop there about carers.  The link has been added below.

On the 16th of October will be Lewisham Child & Adolescent event, although not sure where it will be.

Some questions from the forum asked at James were on the merger of the six CCGs, the use of the Joint Health and Safety Committee and James returning for the Lewisham BAME forum.

Next up was Aaron Brewer who is SLaM’s quality improvement facilitor. Many NHS trusts around the country have quality improvement projects to work out how to improve services for patient and carer (yes, thats right! carers also use services). They want to ensure that the people that access our services experience the same standards of care no matter which borough they live in or which service they com are under.

Aaron spoke about SLaM’s Inpatient Care Process Model. The model is broken down in to six phases of an admission. Lewisham are currently implementing three phases. The decision made to admit and first 24 hours, First 24 to 72 hours in
hospital and Final discharge preparation and discharge.

The model is broken down in the following sections.

Aaron then spoke about Lewisham’s Hospital patient system ‘I Care’ and how data can be used to focus on quality issues and quality behaviour. The group were shown some graphs and quality data to help educate members on how hospital data can help make decisions. We were shown nothing confidential, but numbers and figures. It was pointed out that the graphs look very complex, but I always stress carers MUST get used to poking their noses on data and quality. We need to understand how NHS systems work and how they make decisions on services. 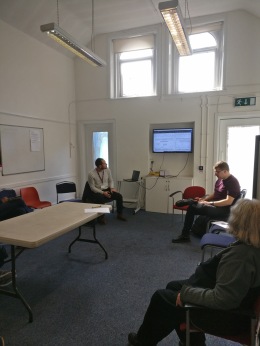 The following graphs were shown on

The next discussion was on how the Hospital’s patient system can help in improving care and outcomes. These will follow on from the Red2Green tool. The Red2Green is a tool to aid daily multi disciplinary team decision making to ensure that every day spent in hospital is meaningful and contributing to a person’s recovery. Red2Green was developed in an acute general hospital but has since been adapted for mental health settings, multiple NHS trusts are now using it and having success in reducing unnecessary delays, length of stay and bed occupancy.

The Ladywell unit based at Lewisham hospital has several mental health wards. We were shown how one of the wards operates in regards to the Red2Green tool. The ward chosen was the ‘Powell Ward’, where we were explained the following

The last part of the discussion was on Standard Operating Procedures (SOP). The aim is to agree Standard Operating Procedures (SOP) to unblock common barriers to discharges between community and inpatient services. The more I looked at who was involved at the SOP, the more my head began to spin because I felt they need to engage with the forum somehow or the risk is the community would not always know what is going on, however we did mention we have invited Lewisham’s head of social care to attend.

This concludes the update for the September Lewisham MH Carers forum. As a note due to resources, I cannot always update on the 4 forums, but will try every so often.